Some weeks ago Insidethefood.com had the opportunity to be invited to a course in Molecular gastronomy in Aarhus Tekniske Skole. There I met Lasse, proffesional chef who started in molecular gastronomy just a few years ago.
Lasse has been working in different restaurants and now he is professor at the school.
His interest for molecular gastronomy started in one of the restaurats he worked for. Although it's not a common practice, chefs are presented to this new trend to awake their curiosity and get insights in how the future of food could look like.
Talking about future, this trend actually started in the s.XVIII with Sir Benjamin Thompson, of course personalities as Nicholas Kurti & Hervé This and El Bulli brough it to popularity after docens of people bored about normal food ;)
Inspired by the beauty of the dishes, Lasse started experiencing on his own, and today as an expert, he will tell us some of the secrets in his lecture.
But first, what's molecular gastronomy?
It's a science, and as such, is in charge of studying the physical and chemical reactions of food during cooking.
This allows us to know what's happening inside the food, and create amazing recipes.

Who do assist to this courses?
This time Lasse will share his knowledge to a small group of students, from chefs to bartenders.
Normally food companies and restaurants send their employees to the courses as part of their learning scheme.
But the techniques they learn won't be normally used in their positions as many of the products
used in molecular gastronomy are expensive for the restaurants, told one of the students to insidetefood.
Of course the course is open to all! So do not doubt if you would like to play around with food!

Tell me what's new
As for the time known, food is solid, liquid ... but did you know it can also be a gas?.
Using the same ingredients, you can create slurries, foams, pearls, just changing the technique. Take a look in this olive oil spheres.

This reaction uses the properties of alginates, a hydrocolloid extracted from algae that in contact with a solution mixed with calcium (it could also be the other way around) forms a strong network, here seen as an sphere, where the inside is still liquid.
Other reactions will produce foams, or gels depending on the compounds you use to start the magic.
Outcome of the day
The day started with basic explanations of the menu to prepare which consisted of Cabbage with chocolate, Gelified hamburger, Vacuum sealed meat and mango fried egg.
Insidethefood was really surprised by the imaginative recipes and the ingredients used for them, which where in most of the cases powders mixed with water that created the new textures and shapes.
Isn't this amazing?
The students organised themselves in small groups and the ovens were turned on, as a molecular master chef competition was declared.
Most of the students were really confident with the techniques though also most of them never tried them before.
I would call that brave!
The principal attractive of molecular gastronomy seems to provoke surprise and incredulity with new textures and food that previously seemed impossible to combine.
Today we have not just learn to make new recipes, but also we had the opportunity of experimenting with emulsions, caramelizing, spheres and food pairing. Can you do this on your kitchen?
One of the most amazing treats was the frieg mango egg, yes you read well, mango egg.
Where is the trick? No egg was present on the recipe. A solidified sphere of mango made the bloom we are all used to.
So, Yes, a non cholesterol egg dish if possible. And it tastes like mango!.
If you would like to assist to one of this courses, just go to the link below, or contact me for getting Lasse details directly.
They have already planned another course in the end of September!
http://aarhustech.dk/kurser/amu-kurser/kursuskalender?KategoriId=1621&Aktivitet=14am35gas49
By the way, how does my egg look like? ;)
By Javier Gines Galera 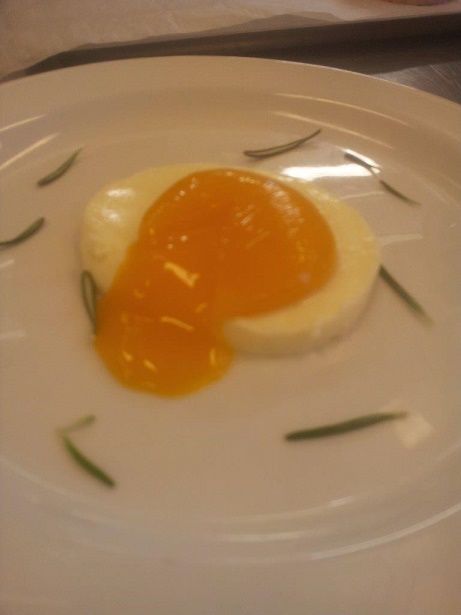