Milk, all you need to be a champion
Got milk? This is the slogan used for nearly 20 years that tried to bring back milk to the mainstream american population after years of consumption declining.
American families consume nowadays 25% less milk than 40 years ago (dairy reporter, graphic 2013). 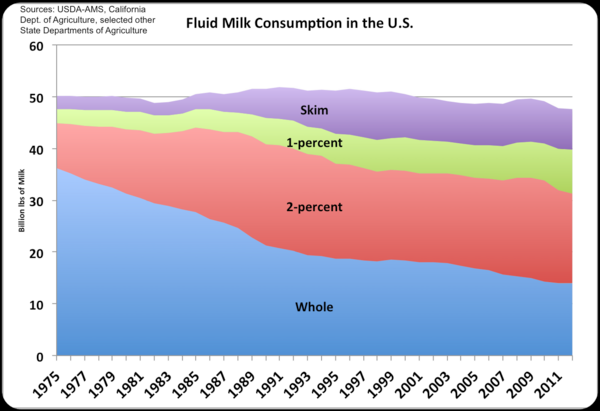 What could be the reason for the decrease in milk consumption?
Are these differences on consumption just cultural, commercial, bad fame or are they related to more intrinsic biological differences that lead our choices?
In this 2 series post you will learn
1. What's inside the milk : Got milk? The facts of the white gold (PART 1)
2. Insight on the future of milk Got milk? The future of the white gold (PART 2)
On this article you will discover what's inside that nutritious liquid, called milk.
Milk - A nordic tale
The northerm mytholog finds the origin of milk in Audhumia, a cow that emerged from the melting ice. The story tells that from Audhumia's river milk producing teets (...) found Ymir, which you see retrated in the picture, the nutrition to start start a legacy of northern gods. 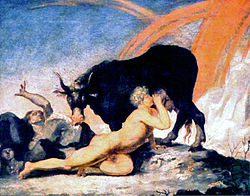 Milk - an overview
Milk is defined as a whitish liquid containing proteins, fats, lactose, and various vitamins and minerals that is produced by the mammary glands of all mature female mammals after they have given birth, and serves as nourishment for their young (adapted from the free dictionary).
Sounds quite special for something drunk from a brick, doesn't it?
If you were asked, where does mayoritary come the milk from, probably the picture of a cow would come to your mind. And actually cows are the first animal from which the worldwide population extracts the milk. Followed by goats, and sheeps in more exotic parts of the world. Don't be so surprised on your next trip to India.
The yearly worldwide production is about 703996079 tonnes, making milk the 5th most consumed food in the world, and it would be the first one on the list considering the nutritious value against others as wheat and rice.
Cows produce 90% of the world’s milk needs. Each cow provides an average of 90 glasses of milk a day, or over 200,000 glasses over the course of its lifetime. Working by hand, a farmer can milk around 6 cows an hour. This laborious work is not the norm in the western world anymore substituted by milking machines.
Milk has accompanied the human being for long time, but this does not mean you could live HEALTHY just from milk, as it only contains 18 out of 22 essential nutrients, of course you would survive, for some time.
Looking deeper on milk there is around 88% water, 5% lactose (carbohydrate), 3.4% fat, 3.3% protein, and 0.7% minerals. Between these components we find oleic acid, conjugated linoleic acid, omega-3 fatty acids and bioactive compounds that may promote health benefits. Along with the famous calcium, phosporus, magnesium and vit b12. But you can find this information easily online.
How could milk influence our health?
The relation of milk with health was well established, both with non that positive outcomes due to the saturated fat content of milk, related with weight gain, obesity and heart disease, as well as with more positive outcomes, affecting positively hypertension, mouth health and even breast cancer. 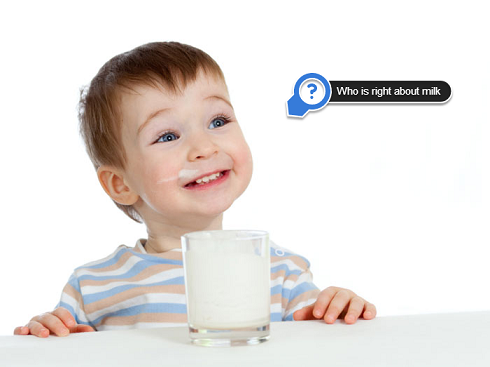 Both positive and negative studies are found over the literature.
Most of the negative studies with milk have focused on the effects of milk components and a disease outcome, but correlation does not imply causation. Milk is not the only food containing for example fat, therefore, should we accuse milk for all the heart disease in the world?.
Probably not, unless the participants on the study where randomised in a trial eliminating all confounders. For now this hasn't been done due to the cost and difficulty because dairy is everywhere, even at your bread probably.
Milk has lots of positive compounds and as all foods, is a complex matrix of interactions and compounds. Milk composition can even be influenced by the diets of our cows and it's a new research field open for your curiosity.
As commented, several studies have approach the effect of milk compounds, but Dr Elwods and his research undertaken by the Universities of Reading, Cardiff and Bristol took one step ahead. They studied for first time the disease risk associated with drinking milk looking at the relation of death with the diseases they are responsible for on the general population. For doing that, his team reviewed 324 articles, and databases with information on population deaths.
Their findings showed that milk could less the chance of dying from illneses as coronary heart disease and stroke by up to 15 - 20 %. . Doctor Elwood also found a relation of intake of milk with disminished colon cancer, diabetes 2 cases and possibly bladder cancer.
"The fact that milk-drinking raises cholesterol is, for many people, proof that milk is a cause of heart disease," Elwood says. "But cholesterol is only one mechanism in heart disease. Blood pressure is another relevant mechanism, and milk-drinking is associated with a lower blood pressure. It is therefore totally unreasonable to base conclusions about milk and heart disease on the effect on cholesterol alone."
Other studies as this one published in the European Journal of Nutrition reviewed the links between dairy, obesity, CVD and diabetes: it basically found no association and in some cases, the opposite of what it was expected, like high fat dairy associated with lower weight.
One more example is the debate between whole fat, and skimmed milk.
In an editorial in the journal JAMA Pediatrics, Ludwig and nutrition expert Dr. Walter Willett, debates that there is actually little data to support the idea that skim milk lead to better health outcomes than whole milk. One of the reasons is that low fat foods do not necessarily lower calorie consumption. A cup of skimmed milk has less calories than full fat milk, this is true. But this cup won't be as filling as one from whole milk.
Probably you will take two glasses some time after.
In this article children that drank skimmed and 1% milk weighted more than children that consumed 2 and full fat milk, and also they got less nutrients, as fat helps to digest fat soluble vitamins (A,D,E,K). So now think twice about what milk to drink, as children consuming low fat milk where actually more prone to be overweight than the ones that drank full fat milk.
Full fat milk was also involved in muscle building, here, full fat milk, taken after exercise was involved in 2.8 times more muscle synthesis than skimmed milk.
Is it healthy to drink milk during adulthood? 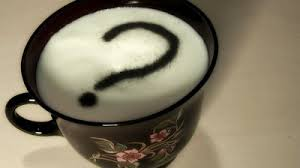 Lactose intolerance is considered the inhability to digest the sugar milk lactose.
In the nordic coutries this intolerance goes down to 18 - 26% of the population, while in other parts of the world can reach up to 65% .
Globally lactose intolerance is the norm, roughly two thirds of worldwide population can't drink milk in their adulthood.
The fact that some people can digest milk on adulthood is a genetic mutation and as such is an evolution advantage, no reason to not take advantage of it.
Intolerance VS Allergy
Intolerance to dairy is not the same as milk allergy, this last one involves a food allergy and strong response from the inmune system, its a reaction to a food protein that is harmless to a non allergic individual. An allergy could lead to anaphilactic reactions and adverse problems that need medical attention.
Lactose intolerance, occurs due to the insufficiency of lactase, the enzyme that breaks the lactose. If lactose is not broken it can't be digested and induces discomfort and diarrhea.
The evolutionary theory 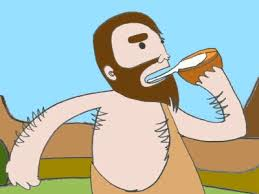 The evolutionary theory about the widespreed of the lactose tolerance mutation remains unclear. This mutation that allow to maintain this enzyme after the weaning expanded throughout Eurasia, to Great Britain, Scandinavia, the Mediterranean, India and all points in between, stopping only at the Himalayas. Independently, other mutations for lactose tolerance arose in Africa and the Middle East, though not in the Americas, Australia, or the Far East.It's not still clear why we suddenly adapted to drink milk, probably milk was easy to obtein from animals when climate pressures didn't allow other options, and this gene was selected along the farmers generations.
Milk and its principal proteins, a short explanation
The protein in milk is around 20 percent whey and 80 percent casein. Whey is s a "fast digested protein" (whey shakes) it's quickly broken down into amino acids and absorbed into the bloodstream. Therefore is used after exercise.
Casein, is "slow digested protein" . and provides the body of protein during a major lapse of time, maintaining anabolism, and inhibiting proteolysis (destruction of proteins) so important if you are interested in gaining muscular mass.
Want to know more about the future of milk? Go to 2. Insight on the future of milk Got milk? The future of the white gold (PART 2)
By Javier Gines Galera